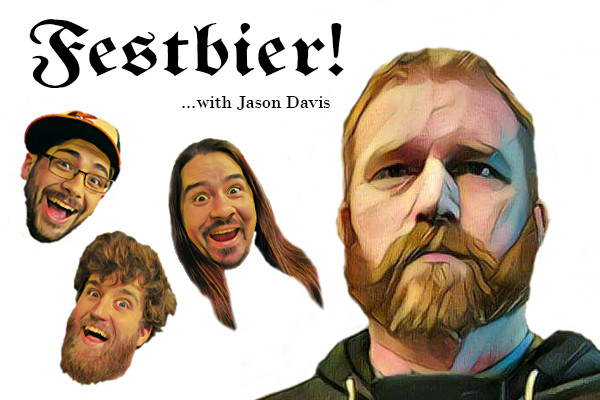 Jason Davis is an accomplished homebrewer and BJCP Judge.  This year, he took home 8 ribbons in World Cup, as well as winning Best of Show alongside co-brewers Arslan & Theo for their Foreign Extra Stout.

A couple of months ago, we asked Jason to come and brew a beer with us for the first iteration of what we call Homebrewer's Showcase. This collaboration, a Festbier, also won a ribbon, taking 1st place in the Light Lager category!  Scroll to the bottom of this page to see the recipe.

We sat down and had a pint with Jason to do some Q&A:

Q: How did you get into brewing?

Jason: My very, very first hand at making beer was back in 1997 with a Mr. Beer kit I bought at a PX in Germany where I was stationed at the time. I brewed it up and tried to drink it after a week and needless to say it wasn't great, but I could see the potential. I don't really count that as the real beginning because I really didn't care much about the outcome.

When it all started for real was in 2008, when I was driving down San Pablo Avenue with my girlfriend. We passed Oak Barrel and she said we should go there and check it out. We did that, and I thought it was all pretty interesting, but I didn't have much interest in buying a kit. At her urging, I bought an intro homebrew setup and a recipe kit. That first batch was left in the carboy for 6 months! I actually was grossed out by it, so I dumped it down the drain. As I was dumping it I noticed it smelled totally like beer. I vowed to try it again, but this time I would actually drink the beer. It slowly started building momentum from there.

Q: What are your favorite beers to make?

Jason: My favorite beers to make are the ones I like to drink, and the ones I like to drink usually, are session beers. I especially like session beers that you can drink by the quart like Grodziskie. My buddy Arslan and I have been into that beer since the first time we brewed it...it just the perfect beer for all occasions Historic beers in general are super fun, I like doing research on an old style and at the end I get to taste a little history. I also like trying to clone my favorite beers of all styles. I'll do "research" while out drinking and use it to create new recipes. I like to try to clone stuff like the best IPAs I come across and my favorite German beers.

Q: Why did you choose the Festbier for Homebrewer's Showcase?

Jason: You guys had suggested we do a lager together and I had been thinking at the time about how great the best festbiers are, so it was at the top of my list. When I lived in Germany, I had a fair bit of this style of beer at the various fests I'd go to...but I hadn't brewed one yet. I think it's a great style, it's right in the middle of amber and pale German lager.

Q: You seem to collaborate with a lot of different brewers. How do you approach collaborations?

Jason: I feel that brewing with others can make life a lot easier, and a lot more fun, as long as everyone knows what needs to be done and when...so I usually brew with at least one other person, often more. I have a big system, so we all can walk away with some wort to ferment. Additionally, we can use different yeasts, dry hopping schedules and varieties and fermentation curves. Then we come back later and taste them all side-by-side and figure out what worked and what didn't.

Q: How does your work or other hobbies affect your homebrewing and vice-versa?

Jason: I do software for work, so of course I like writing brewing software in my spare time. Since brewing and brewing chemistry have a fair amount of calculations, the programming is a good skill to have. I love to cook as well, and that plays well with the navigating the details of recipe formulation. And in the other direction, people at work think I'm the crazy beer guy.

Q: What would be your advice to other brewers? How could they best improve their beers?

Jason: Learning the off-flavors and general brewing flaws and how to recognize them is one of the most important thing a brewer can do--otherwise, how would you know something is wrong and how would you know how to change things in the future? Studying what a good example of a beer style should taste like is also super important...check out the BJCP guidelines and try lots of top commercial examples. The best way to improve most beer is a sharper focus on fermentation quality. If you're not repitching, make yeast starters with a goal of ensuring that you're pitching enough, or more, of vibrant healthy cells into your wort. Also, control the fermentation temperature curve and start cooler and end warmer to minimize fusels and esters and encourage the yeast to finish up the mess they made early on in the ferment.

Q: You also do quite a bit of judging. What called you to be so involved with beer?

Jason: First I started entering a few competitions and winning a few awards here and there. Then, I became curious about how the beers were getting judged and what the competition was like, so a few years later I was invited to steward a competition and I signed up to do that. After stewarding, I got really interested in the BJCP Guidlines and an opportunity to take the class and tasting exam came up and I had to take it. After that, they just keep emailing me, and I keep judging. As for what called me into being so involved with beer, it's just that it's super interesting to me. I lived in Germany and loved the beer culture there and I came back to the states when craft beer was just starting to heat up. I've always preferred beer to other alcoholic beverages and I identify with it to a degree.

Q: How have your interests changed or evolved in brewing over the years?

Jason: I rarely brew the same recipe twice and it's been that way since the beginning. I still come back to brewing Weissbier once or twice a year, Grodziskie here and there, but the rest are usually something new...a new style or a new recipe or a new approach. The biggest change has been probably the gradual drop in gravity over the years. At first, I was really into making big beers, but eventually I got into making beers that I'd want to drink anytime--usually 6% ABV or less.

Q: What is your favorite recipe for everday drinking?

Jason: I hate to sound like a broken record, but Piwo Grodziskie wins my vote for everyday drinking.  Here is the recipe:

Q: Are there any Bay Area breweries or beers you are excited about?

Cellarmaker, Rare Barrel, Temescal and Altamont. Cellarmaker makes magical hoppy beers that are some of the best I've ever had anywhere, and Temescal makes great hoppy beers as well that have this amazingly light and fluffy mouthfeel and the lower ABV that I appreciate. Rare Barrel is one of a kind in sours nationwide and Altamont is always super solid, super clean and dry. These breweries are all places I stop at regularly, they're doing great stuff. Also, Fieldwork is awesome and Sante Adairius is awesome, and Russian River is awesome. We're in a great place for beer.

Q: How do you see craft beer moving into the future?

I feel like the future of craft beer is fresher and more local. You can really see this in the world of hoppy beer...some of the new juicy IPAs are barely a few weeks old at most. Beer lovers have always understood that draft beer was superior and more and more are understanding the magic of very fresh beers, IPAs especially, that are served 20 feet from where they were fermented. People want the highest quality and that means brewery taprooms. Also, juicy IPAs are here to stay.

Here is the recipe we brewed:

Ferment at 48°F with a proper diacetyl rest at the end
Rack to secondary and cold condition for a month or more until it is ready
Carbonate to 2.5 volumes of co2 and enjoy!